TRIVIA WINNER: Congrats to Sean McCormack of Sparks, NV, who correctly identified Dick Selma as the 1969 Padres pitcher who would play for another team in 1970 and register 22 saves. He played for the Phillies.  The Prize: Starbucks Gift Card.

ANSWER TO TRIVIA QUESTION IN THE PREVIOUS COLUMN: Dick Selma pitched for the 1969 Padres but went onto Save 22 games for the Phillies the following season.

If ever there was a turning point in a season it came for the 1962 Baltimore Orioles at the hands of F. Robby, and we don't mean Frank Robinson. It was Floyd Robinson, the slick fielding outfielder who patrolled the outfield for the Chicago White Sox. And it came on June 1, at Memorial Stadium in Baltimore. And it came at the expense of one of the games best relievers.

The Orioles only finished with less than 80 wins twice during the 1960s. It happened in 1962 and again in 1967 with the collapse of the World Champion Orioles who had both Brooks and Frank to lead the team. The 1962 version was not a bad club. They had power with Jim Gentile's 33 homers leading the way, Brooks hit 23 and batted .303 while Russ Snyder hit .305 and with Jerry Adair, Boog Powell and Jackie Brandt all hitting double figures in homers. 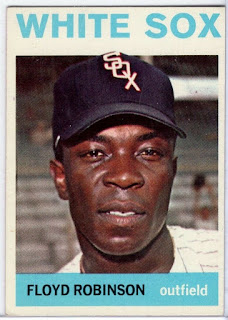 The pitching was fairly solid with a young Steve Barber, Milt Pappas, Hoyt Wilhelm, Dick Hall and an aging but competent Robin Roberts. They were better than the 77 wins they recorded but the end really began on the first day of June.

The O's had never been less than 5.5 games back of first and actually spent a few days in April tied for at the top of the AL. The didn't have long losing or winning streaks but did have some in the 4-5 game range. Still they were pretty consistent. Then on June 1, 1962 they faced Ray Herbert and the White Sox. Pappas took the mound for the Birds.

The game was uneventful with both starters going eight innings and heading into the ninth with Chicago holding a 2-1 lead.  Hall pitched a 1-2-3 ninth inning but Herbert who was still in the game was tiring. After giving up a single to Gentile he was replaced by Frank Baumann. Charlie Lau sacrificed and Turk Lown came on to pitch. Two singles later the game was tied and it was Wilhelm, manager Billy Hitchcock called on as they went into extra innings. Lown stuck around. 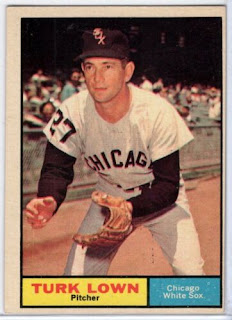 A scoreless White Sox 10th led to trouble for Lown in the bottom of the inning. After striking out Johnny Temple, Russ Snyder doubled. An intentional walk to Brooks Robinson brought up Wilhelm. A wild pitch put runners on second and third before Lown K'd his opposite number and Lau to end the inning by striking out the side.

The top of the 11th was when F. Robby of the American League made his play. He worked Wilhelm for a walk and then promptly stole second. After Bob Farley popped out, Charlie Smith laced a single to bring Robinson home.  With Sammy Esposito at the plate Smith was thrown out trying to steal. Good thing for the O's because Esposito followed with a single and a Wilhelm knuckler got away from Lau sending pinch runner Luis Aparicio to second. The key to the inning was Smith getting thrown out as Cam Carreon struck out.

The O's went quietly in the 11th and the Sox had a 3-2 win and the O's were now six games back. Little more than week later they were 8 back and 7th in the 10 team AL. While they would get better for a couple weeks and actually move up in the standings by July 27th they were back to double digits behind the leader, 10 games off the pace. They would eventually finish the season at 77-85, 19 games back of the first place Yankees, losing their final four in a row.

Hitchcock would bring his team back in 1963 by almost identically reversing the teams 1962 record and finishing in fourth place. The O's had basically the exact same lineup as the previous year but Steve Barber turned into a 20 game winner and both Roberts and Pappas had outstanding seasons. 1963 also marked the year Wilhelm joined Robinson as a member of the White Sox in a trade which involved players who played in the above storied game.