TRIVIA QUESTION: He was one of the most feared hitters of his day, yet Rocky Colavito was traded often. How many times did the Rock get traded from one team to another?

ANSWER TO TRIVIA QUESTION IN THE PREVIOUS COLUMN:  One of the outstanding pinch-hitters of the era only appeared in 411 games but of those 159 were in the pinch. Carl Means Taylor played five different positions and stuck it out with three different teams in his career. Twice he played for Pittsburgh while adding the Cardinals and Royals to his resume. In 1969 in 104 games he went to bat 221 times and hit a career high .348. Perhaps his other best known factoid is the step brother of O's first sacker, Boog Powell.

When a team loses 105 games there are a lot of facets to look at but when it comes to the 1964 Kansas City Athletics you only need to look as far as the single pitch known as the "gopher ball." The home run delivered by a pitcher and for the A's of 1964, there were plenty of them.

When a pitcher gives up one home run every nine innings it's considered on the cusp. For A's pitchers in 1964, it was very, very bad. Leading the way was ace Orlando Pena who pitched 219 innings and finished 12-14. However, in those 219 innings he allowed an amazing 40 home runs to opposing batters. That is 1.6 homers per nine innings. 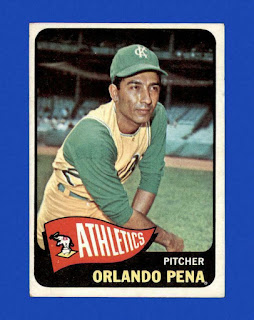 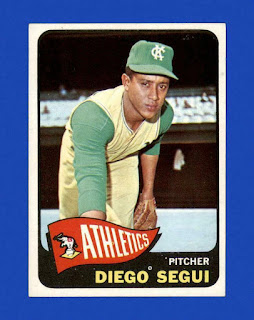 Ted Bowsfield, Wes Stock and Jose Santiago defied the odds and were all at 1.0 per nine innings or less. The damage was already done by the time these three got into the game. When your top three starters give up almost 100 home runs in 600 innings, you are not going very far. At least you didn't in 1964. Either way it was not enough to offset the 34 hit by Rocky Colavito or the 28 belted by Jim Gentile.

The situation improved a year later. In 1965 the homers the pitching staff allowed dropped from 220 to 161 with Fred Talbot leading the way. He only gave up 25 in 198 innings and the team average of 1.0 was right where it needed to be. It still wasn't great and only good for 9th in the AL. The team ERA did improve to 4.24. When you only score 3.6 runs per game, you are going to lose more than you win.

The hitting didn't improve but actually dropped substantially. With Colavito gone and Gentile limited to 10 homers in 38 games, Hawk Harrelson led the team with 23. The club hit 110 for 10th in the American League. Not surprisingly, Kansas City again finished in 10th place but only lost 103 compared to 105 the previous season. They were 43 games back of pennant winning Minnesota while in 1964 they finished 42 back of the Yankees.