Death on the Diamond - Houston

TRIVIA QUESTION: Aside from the players named in this column, three other players died while active players in the 1960's. Who were they?

ANSWER TO TRIVIA QUESTION IN THE PREVIOUS COLUMN:  Pitcher Jack Fisher, who lost 24 games for the Mets in 1965 and who had only one winning season in the big leagues (1960 when he was 12-11) gave up two very significant home runs in his career. He gave up a dinger every 10 innings in his career and in 400 games allowed 193 of them. On September 28, 1960 in the bottom of the 8th, he gave up a home to Ted Williams. It was Teddy Baseball's last at bat ever. In traditional fashion, Fisher took the loss. Almost a year to the day later (Sept. 26), Fisher faced Roger Maris. In the third he gave up a homer to Maris, no. 60 which tied Babe Ruth for the most homers in a season and to then the only other player to reach 60 in a season .

Sad as it seems, the Houston Colt .45's seemed to be snake bit when it came to players who took to the field for the club in the 1960's and died while still active. Walt Bond, Jim Umbricht and Jay Dahl all left the diamond too soon, and all were active at the time of their death. 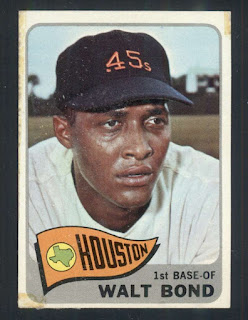 Bond was just 29 and had been released by Houston. He died as a Minnesota Twin from Leukemia, Umbricht was still pitching for the Astro's when cancer took his life at 33, while the 19 year old Dahl was killed in a car crash, trying to return to the big leagues with Houston.

Bond's career showed signs of brilliance but the blood disease took its toll. A rookie for the Cleveland Indians in 1960 his debut was less than spectacular. He batted .221 in 40 games, was used much less the following season but in 1962 was called up at the tail end of the year. He hit six home runs in just 54 AB and batted .380.

1963 saw him in the US Army where he was diagnosed with the disease. His contract was sold to the Colt .45's as it seemed the disease was actually in remission. It was in 1964 he had his best season. His 20 homers and .254 BA with 85 RBI seemed to set him on his way. The following year his average improved to .263 but his power fell off to just seven dingers. It prompted teammates to wonder if the disease was back.

He continued to slump in 1966 and was sent to the minors where he starred again. Aware of his ailment the Astros and Twins made a deal. His contract was sold to Minnesota and after only 10 games and a .310 BA he was released. He caught on with a minor league club but soon was in the hospital again and he died in September in Houston. 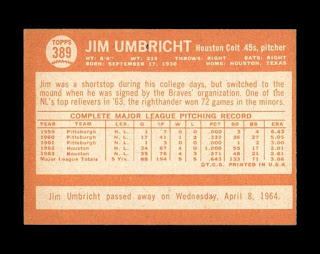 (Umbricht's 1964 Topps card was updated to mention his death.)
In the off season he was diagnosed with malignant melanoma in his right leg. His comeback in 1963 after surgery was the stuff dreams were made of. At age 32, often pitching in excruciating pain,  he was 4-3 in 76 innings with a 2.61 ERA. His health went down hill soon and he died in a Houston hospital in April, 1964. His ashes were spread over the construction site of the Houston Astrodome. His number 32 was retired by the club and the team wore black armbands during the 1964 season.
Dahl's case was even more tragic if that can be said of anyone's death. He was just 19. Drafted right out of high school, Dahl dominated in a quick minor league stint with a 5-1 record. His only loss was a one-hitter. Perhaps for publicity and to draw in the fans, perhaps because he was such an outstanding prospect, the Colt .45's brought up the 17 year old right away and gave him his first and only big league start. It was against the Mets on September 27, 1963. 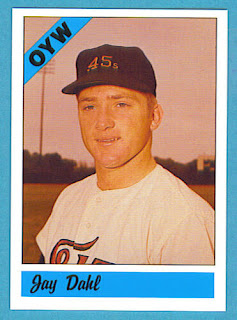 Dahl was part of an all-rookie line up for Houston that night. It was the first time, after the very first season of major league baseball, this was done. The starting line-up consisted of Sonny Jackson, Joe Morgan, Jim Wynn, Rusty Staub, Aaron Pointer, Brock Davis, Glenn Vaughan, Jerry Grote and Dahl. Vaughan by the way was the only player in the starting line-up aside from Dahl, who only played this one major league season, playing in just eight other games.

The young pitcher never made it out of the third inning. After a scoreless first, he gave up three runs in the second and four more in the third before being removed with two out. In all, his entire major league career was that game in which he went 2.2 innings, gave up seven runs (five earned), seven hits and a wild pitch.

Back problems caused him to sit out the 1964 season but he was back pitching for Salisbury in 1965. He was 5-0 and seemingly back on his way to the big leagues. He had just pitched his team into first place. Later that night, June 20, 1965 he was celebrating with two friends after seeing a movie. Teammate Gary Allen Marshall was driving his GTO with Dahl and a 20-year old female companion apparently at a high rate of speed. The car hit some sand on the roadway and skidded out of control, hitting a tree.

Dahl and the woman were both killed, Marshall survived but was blinded. He would go into the ministry later in his life and died at age 62. In his only minor league season he was 3-4 in 52 innings.