The Ultimate One Time Match-Up

TRIVIA QUESTION: In 1963 and 1964 Bill Monbouquette led the American League in one dubious category, with the exact same statistic each year. What was that league leading stat?

ANSWER TO TRIVIA QUESTION IN THE PREVIOUS COLUMN: Roberto Clemente made his major league regular season game debut April 17, 1955 against the team he originally sighed with; The Brooklyn Dodgers. He went 1-4. The previous game the right-fielder was Roman Mejias, but the regular right fielder in 1954 was Sid Gordon. Gordon moved to third base to make room for Clemente in 1955. It was his final season. Clemente went on a seven game hitting streak and the Bucs were 2-10 when he finally went hitless .

The names Carroll Hardy and Ron Taylor don't strike fear into many people who follow the game of baseball, nor would they ring a bell. Both were journeymen players who spent a combined 19 years in the big leagues. Taylor would finish 45-43 pitching for five teams over 11 years. Hardy would hit .225 with 17 homers while playing for four teams in eight years. But on April 11, 1962 they would clash with perhaps the best they could offer and only one would come out a winner. 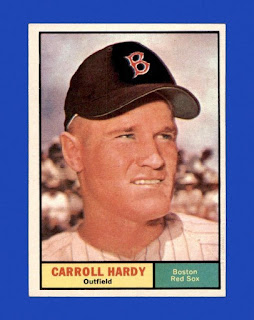 It was only the second day of the new season when the Cleveland Indians invaded Boston's Fenway Park to take on the Red Sox. The Indians won the opener 4-0 with ace Dick Donovan going the distance and Hardy picking up two hits in the game. It was only a premonition of things to come. While only 14,000 fans attended Opening Day in Boston, just 2,466 showed up on day two. It was a Wednesday but a paltry showing nonetheless by Red Sox faithful, hardly a nation on this day. 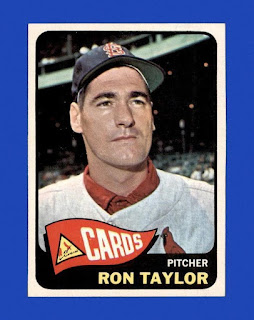 Maybe it was the match-up. Rookie Ron Taylor got the start for the Indians, facing the consistent Bill Monbouquette.  Monbo, a model of consistency, would win 85 games over a stretch of six seasons. Taylor was in for only one of eight games he would pitch for the Indians this season before moving on to the NL.

The game started out hard with Monbo hitting Ty Cline to lead off the game. A strikeout and a double play ended the inning but it was the only "hit" the Indians would get until the sixth when Taylor himself led off with a single. From the mound, Taylor was matching his Boston counterpart pitch-for-pitch. Three harmless singles was all the Sox could muster through six.

The Indians went up and down in the seventh and in the bottom of the inning it looked like Taylor might be faltering. A one out double to Carl Yastrzemski might lead to a score. A fly out and a ground ball left Yaz stranded. The bottom of the eighth was a little shakier for Taylor. A lead off double to Hardy (his first hit of the game) put the seventh man in the order into scoring position. But Taylor struck out Eddie Bressoud and Monbouquette before walking Pete Runnells and getting Chuck Schilling to fly out.

Still, in the ninth and tenth Monbo was masterful allowing only a single and in the bottom of the 10th Hardy singled but was left stranded as his teammates could do nothing with Taylor. Then came the 11th. The Indians were trying to end it right there. A single and three flyball outs however, kept them away from the plate.

The bottom of the 11th saw a pair of Red Sox hits almost lead to a run. Runnels singled but was wiped out by a double play ball. Gary Geiger singled and with Yaz at the plate he was thrown out trying to steal. Too bad because Yaz would lead off the bottom of the 12th with a triple. 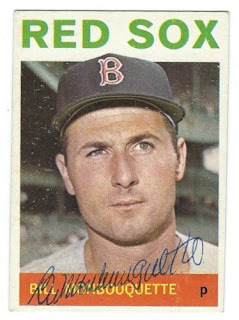 The 12th had to do it for the Sox. Monbouquette gave up a single and walk in the top of the inning and he was showing signs of tiring. How much longer was this game to go was anybody's guess? The triple by Yaz gave the few Red Sox fans still in their seats at Fenway, some hope it was going to end.

Taylor was ordered to intentionally walk both Frank Malzone and Russ Nixon to set up a force play at the plate. It gave Hardy a chance to come through and come through he did. Hardy took Taylor deep for a game winning Grand Slam Home Run, Red Sox 4-Indians 0. The pitching was fantastic all the way until that point, with Taylor taking the loss despite giving up 10 hits and three walks. Monbouquette deserved the win certainly, giving up only 4 hits, facing only 43 batters in 12 innings for the shutout win.

Taylor would pitch only 33 innings that season, or just 21 more, finishing 2-2. After the season he was traded to St. Louis in the deal which brought slugger Fred Whitfield to the Tribe. Hardy, who went 3-for-4 in the game nearly hitting for the cycle with a single, double and homer, driving in all four runs, would finish the season (his only one as a regular in MLB) batting .215 with eight homers and 36 RBI.

At the same time Taylor was being sent to the NL, Hardy was also on the move, traded to Houston for Dick Williams who would later manage the Sox. Hardy's career ended with Minnesota in 1967. Taylor pitched until 1972 closing it out with the Padres. He had his greatest success as the Mets closer in the late 1960's including the Miracle 1969 season when he was 9-4 with 13 Saves.