We wish to welcome our sponsor; Huggins and Scott Auctions, one of the premier sports trading card and memorabilia auctions house in the U-S.
Now with MONTHLY Auctions!
"SPECIAL OFFER"
You can get a signed paper back copy of the above book
"Tales of My Baseball Youth - a child of the sixties"
for $15 Shipping Included
for a limited time only (through December 31st)
Use PayPal to brillpro@prodigy.net or contact us at the same email for other payment.

TRIVIA QUESTION:  Two 1960's second basemen were on parallel careers, both were iron men of sorts, each playing in at least 160 games in a season - three times. They also faced each other with significant results in a World Series. Who were they?

ANSWER TO TRIVIA QUESTION IN THE PREVIOUS COLUMN: When the San Diego Padres acquired Downtown Ollie Brown to begin the 1969 expansion season, they were hoping to get a slugging outfielder. They got a guy who could drive the ball certainly and they got him from the power laden San Francisco Giants.

While his career would start with the storied New York Yankees, he'd make his mark as a Cincinnati Redleg and finish as a member of the Boston Red Sox, while playing for five other teams in between. Make no mistake about it; Deron Johnson was a slugger extraordinaire. 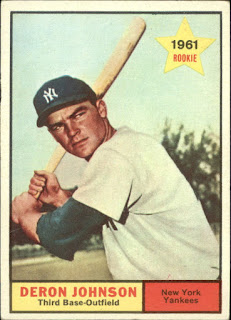 He would play all three outfield positions, first base and his natural position; third base. He came up with New York in 1960 and was sent to Kansas City along with Art Ditmar for Bud Daley in 1961. Two years later he was sold to the Reds where he had his best seasons, blasting 90 homers in four years. He hit 32 and led the league with 130 RBI in 1965 while batting .287.

By 1967 the Reds sent him on to Atlanta in a four player swap which brought Mack Jones to the Reds. A year later he was sold to the Phillies. In the next four seasons he hit 87 homers including 27 in 1970.  In the next three years he was traded three times, sold once, released twice and signed as a Free Agent once. And in all of his travels, the only name player he was swapped for really was Jones, a slugger in his own right. 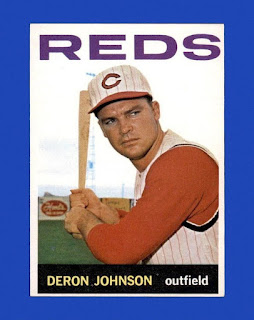 So why was this really good player who could hit for a respectable average, blast lone homers consistently and play good defense, so well traveled?

The 1961 Yankees were loaded so there was little need for developing a player of Johnson's caliber. Kansas City was a mess and who could figure anything Charlie O. Finley did during the 1960s. The Reds knew what they had. However, in 1967 Johnson's power had fallen off to 13 homers and he only hit .224. In addition, Lee May was waiting in the wings and ready. Johnson became very expendable. 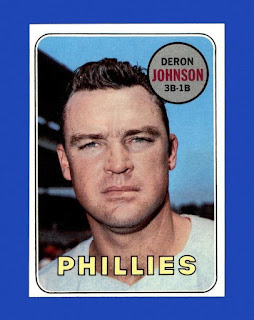 Johnson didn't hit in Atlanta and the Braves picked up Orlando Cepeda so moving him on to the Phils was easy. He regained his stroke in Philadelphia and was again back in the power numbers with 17, 27 and 34 home run seasons to follow, with another 20 in the year they shipped him off to Oakland.
His stops in Milwaukee, Boston (twice), and with the White Sox were all career ending moves where he was used as a pinch-hitter and clubhouse experience-guy. At age 36 he did have a final year of power with 19 dingers but called it a career after the next season. 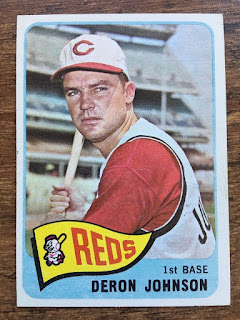 It was just one of those careers where he was in the right place at the wrong time, and for a short period of time at that. His 245 career home runs and 923 RBI were decent numbers for a guy who spent time with so many clubs during 17 years in the big leagues.  Among his accomplishments was hitting four consecutive homers over two days against Montreal. He followed his playing career by serving as a coach and in 1992 while coaching the Angel he was diagnosed with lunch cancer. He died at age 53.

Please share this blog with your friends and colleagues and leave a comment at the bottom of the blog if you have one. Thank YOU VERY MUCH!! Please pick up a copy of my book "Tales of My Baseball Youth; A Child of the 60's" at www.bobbrillbooks.com, or on Amazon.
Posted by Baseball in the 1960s at 12:46 PM