The Rare Error of Roberto Clemente

NEW TRIVIA QUESTION: In a career which spanned 12 years in the big leagues, how many times did Dodger third baseman, John Kennedy play in the post season?

TRIVIA ANSWER FROM LAST COLUMN:  Johnny Bench twice hit at least 40 home runs in a season for the Cincinnati Reds. He hit 45 in 1970 and 40 two years later. 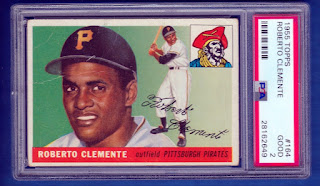 It was the rarest of rare events when Roberto Clemente made a major error. It was even more unusual when it cost his team a game. However, that was exactly what happened on August 14th, 1965. It was a memorable night to begin with because it was right in the middle of the Watts Riots and it happened at Dodger Stadium. Attendance was only 29, 237, mainly because people were afraid to leave their homes. The city was on fire and people were dying. Baseball however, witnessed one of it's great pitching match-ups and a game which few will remember except those who were there. I was.

Sandy Koufax squared off against Don Cardwell. The former in his prime, the latter heading toward the end of a decent career. The Bucs were headed for sixth place in a ten team league. The Dodgers would go on to defeat the Twins in the World Series. For Koufax he was looking for win no. 21 in a season where he would dominate again.

The Pirates were a good hitting team as usual back then, but a team in transition. Clemente was still in his prime and batting .342 and was backed by Donn Clendenon's 28 homers, Willie Stargell's long taters and the amazing defensive play of Bill Mazeroski and Gene Alley up the middle. Catching Cardwell that night was journeyman, Jim Pagliaroni.

For Los Angeles it was the switch hitting infield of Parker, Gilliam, Lefebvre and Kennedy and the speed of Willie Davis backed by Lou Johnson and Ron Fairly. Johnny Roseboro as usual was catching Koufax.

The game was scoreless and a real pitchers dual. I remember Mazeroski getting the Bucs' first hit, a single in the second. With two out in the bottom of the second Davis hit a shot to deep right field. Clemente, the ever graceful outfielder, leaned into the ground level box seats and robbed Davis of a home run. Without that the Dodgers would have had a 1-0 lead and the game would have ended in nine. Not to be. 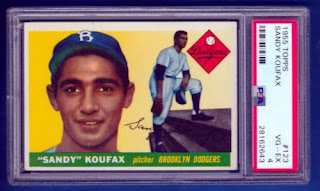 To show you this was the 1960's, with two out in the top of the tenth and the game scoreless, Pirate manager Danny Murtaugh let Cardwell, the pitcher, bat. He struck out. The Dodgers would have their chance in the bottom of the tenth.

The inning began harmlessly. Roseboro flied out to Clemente followed by Kennedy also hitting a line drive out to Clemente. Then came the ultimate mistake. With two out in the bottom of the 10th, Cardwell walked Koufax. The mortal sin in baseball is to walk the opposing pitcher. Koufax was not a great hitter and manager Walt Alston chose to let his ace bat. Wes Parker followed with another walk and Murtaugh did not take Cardwell (who would pitch a no-hitter in his career) out.

Jim Gilliam hit a line drive to Clemente in right. The Great Roberto charged in for what looked like a routine final out. The ball hit off his glove and bounced away for an error. Koufax, running on contact, scored easily despite a good throw to the plate. Dodgers win 1-0.

It was an amazing game, both pitchers throwing 10 innings and a lot of unusual things you will never see again, or even before that. It was a night to remember  and both men are now in the Hall of Fame.