TRIVIA QUESTION: While Frank Robinson never hit 40 home runs for the Reds, Johnny Bench did. How many times did Bench reach the 40 homer mark? Answer in our next blog.

ANSWER TO THE LAST TRIVIA QUESTION: Juan Marichal completed 20 or more games as a starting pitcher for the SF Giants during five seasons. He finished his career with 244 complete games.

Frank Robinson was a force to be reckoned with from the first day he came up to the Major Leagues in 1956. Robinson concluded his first year with the Cincinnati Reds with an amazing stat line. In 152 games, he came up 572 times, banged out 38 homers, drove in 83 and hit a sweet .290. He also had an on base percentage of .379 and slugged .558. Not bad at all for a 20 year old Rookie. He also had 166 hits in those 152 games. Pretty amazing.

He also made the All-Star team and finished 7th in the MVP voting while being named Rookie of the Year with a unanimous 100 percent.  He continued to play outstanding defense and pound the ball toward near record numbers on his way to the Hall of Fame.

Over the next nine years he averaged well over 30 homers and hit above .300 while driving in 100 runs or more four times and 90+ twice more. So why at the end of the 1965 season did the Reds send Robinson to the Orioles for Jack Baldschun, Milt Pappas and Dick Simpson? Pappas was a good starting pitcher, Baldschun was a jouneyman pitcher who won 9 games the rest of his career, and Simpson was a career .207 hitter over seven seasons.

The truth was the Reds needed pitching and Pappas was supposed to provide it. He sort of did for two seasons ending up 30-29. Up until the trade he had won consistently in double figures with the O's. In the eight previous seasons he won a total of 110 games which was pretty remarkable. After two seasons (he won 30 for the Reds into his third season) before he was sent to Atlanta where he failed before ending up with the Cubs where he found himself and twice won 17 games before calling it a career. After being acquired by Cincinnati he won 99 more games finishing with 209.

What might be hidden in all of this was Pappas had worked about 200 innings per season and it may have taken a toll on him by this time. Also his second season in Cincinnati was not spectacular. His ERA was well over 4.00 and approaching 5.00 which meant he was not pitching well, but his team was batting well behind him. 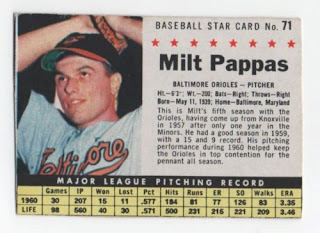 It wasn't that Pappas was not good, it was that Robinson was GREAT. In his first year in Baltimore he won the Triple Crown, the MVP and led the O's to a World Series sweep of the Dodgers in 1966. With Robinson leading the way the Orioles formed a near dynasty for years to come.

Meanwhile the 1966 Reds finished 7th in the National League with a 79-81 record and next to last in attendance, firing their manager midway through the season. Fans who actually did go to Crosley Field to watch them play moaned every time Pappas took the mound, while watching Robinson's O's tear up the AL on the scoreboard.

The trade may have been due to several circumstances in the turbulent 60's when a player was tied to his team due to the Reserve Claus. Robinson was seen somewhat as a malcontent, had been arrested earlier in his career, was never treated by management as well as before that incident and he talked about quitting baseball in 1963. All those factors led him to ask for a trade and when it finally came it was the worst trade in club history.

And the rest as they say "is history."

You can pick up a copy of "Tales of My Baseball Youth; A child of the 60's" at www.bobbrillbooks.com and on Amazon.