The Most Important Mets Gave Ever

TRIVIA WINNER: Congrats to  Alan Beatty, of Bound Brook, NJ, who correctly identified Jimmie Hall as the other player along with Don Mincher and Pete Cimino whom the Angels got from Minnesota for ace pitcher Dean Chance. The Prize: Starbucks Gift Card.

ANSWER TO TRIVIA QUESTION IN THE PREVIOUS COLUMN: The Angels received outfielder Jimmie Hall in the trade along with Don Mincher and Pete Cimino, which sent Dean Chance to Minnesota.

Most people don't think of Ken Boyer as a New York Met, preferring his career with the St. Louis Cardinals, but he was a Met and also played with more teams including the White Sox and the Dodgers. However, it was as a Met where he made history. Few people remember it, but it was Boyer who drove in the winning run in a non essential game in 1966. 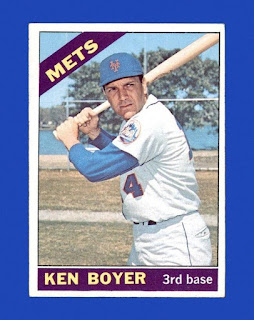 It was a Tuesday night at Shea Stadium and the 14-thousand-plus fans in attendance would probably not even remember this one. The game had one significant factor; a Mets win assured they would NOT end up in last place for the first time in franchise history. The club was destined to finish near the cellar. In fact, the Mets had never finished out of the cellar in their history. They wouldn't the following year either.

In the four previous seasons  the club had lost 120, 111, 109 and 112 games. In 1967 they again would lose 101. But in 1966 for the first time they would lose in double digits. The number nine grew large in New York and for the first time since the Dodgers and Giants fled the Big Apple, New Yorkers had a National League team which was not last in the standings.

The game on September 6th, would assure it. Reds ace Jim Maloney was facing off against Mets youngster, Dennis Ribant. Maloney was looking for his 15th win, Ribant hoping for his 11th. It was the latter's night.

Ribant made it through the first retiring the side in order. When the home town boys came to bat Maloney was wild. He walked lead off hitter Bud Harrelson who promptly stole second. Ron Hunt, as was customary with the second sacker, was hit by a pitch. He would go on to record 11 times being hit by the pitch that year, and would get hit 243 times in his bruised body career.

So with runners at first and second Maloney, K'd Johnny Lewis but walked Al Luplow. Ken Boyer came to bat. The aging Boyer's best days were behind him but he was still hanging on at age 35. Maloney uncorked a wild pitch scoring Harrelson and everyone else moved up ninety feet. Boyer then drove a single to left scoring both Luplow and Hunt and the Mets led 3-0. 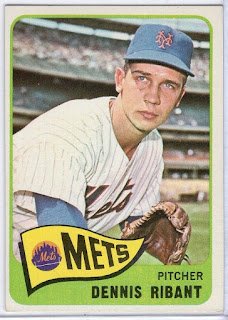 The Reds would score two in the seventh; one on a Deron Johnson homer, but for the rest of the game it was all Ribant. The young righty went the distance giving up six hits while walking one and striking out three. Maloney took the loss. In six innings he walked seven, uncorked a wild one and hit a batter. All that came to unravel him in the three-run inning.

The bottom line is that was win no. 60 for the Mets. The Cubs would only win 59. While Wes Westrum's team would go on to win 66 for New York, the key was finishing out of last place. And they did.

The win was Ribant's last for the Mets. They shipped him off to Pittsburgh after the season for Don Cardwell in a four player deal.  Maloney would remain one of the aces of the Reds staff through the decade and Boyer would move onto the White Sox midway through the 1967 season before getting his release and ultimately finishing up with Los Angeles.