TRIVIA QUESTION:  First baseman Jim Gentile became a star player only after he was traded from the team which originally signed him. Name the team he signed with, and which sent him to Baltimore.

ANSWER TO TRIVIA QUESTION IN THE PREVIOUS COLUMN:  While the three teams battling it out for the National League pennant in 1964 had numerous 19-game winners on their pitching staff, only the Cardinals Ray Sadecki won 20. He finished the season 20-11 with a 3.68 ERA.

It must be tough if you are a fan when your teams wins 95 games and is not even close to winning the pennant. Imagine being Jim Gentile in 1961 and having the season of your life, only to see your very good club finish out of the money, way out of the money. Such were the 1961 Baltimore Orioles. Diamond Jim did get some "respect" a number of years later!


The reason the 95 win Orioles were destined to finish in third place, 14 games out of first, were two fold. The Yankees won 109 and the Tigers won 101. If the O's felt bad, how about Detroit. They had 101 wins and were still eight game back at the end. 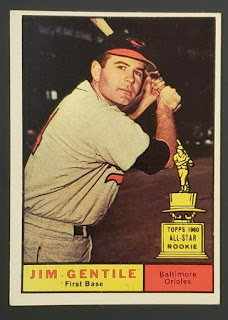 The Orioles started off slowly but recovered nicely by mid season. At the half way point they were 44-36 and already seven games out of first. It didn't help the club began the season losing five of their first six. The second half is where the club stood out. They won 51 games after the midway point including streaks of 9-of-11, 14-0f-17, along with several five game win streaks and no substantial losing runs.

Good pitching and a solid offense led by Gentile kept them in it all the way. Gentile had a career year, blasting 46 home runs, driving in 141 (see video above, originally 140 RBI) to lead the league with Roger Maris, while batting .302. He scored 96 in 148 games. The 27 year old first sacker seemed headed for greatness.   He would never again achieve such lofty heights, however. A 19-year old Boog Powell would push him from the bench. 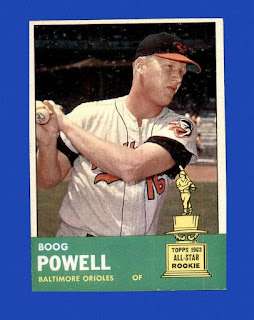 Jackie Brandt, Whitey Herzog and Brooks Robinson all had good seasons at the plate, surrounded by a cast of average players who bounced around the big leagues. Ron Hansen, Gus Triandos and Dick Williams were among them. Interestingly enough, two of the better managers to lead clubs in the big leagues were on this team in Williams and Herzog.

On the pitching side, the staff was led by four pitchers who would not see their 24th birthday in the 1961 season. Steve Barber was the ace with 18 wins (23 years),  Jack Fisher (22), Milt Pappas (22), Chuck Estrada (23) and the old man of the staff at 36 years old was Hal Brown. They all won in double figures capping 66 wins between them.

The bullpen saw the aging Hoyt Wilhelm with 18 saves. Three "relievers" pitched over 100 innings but only Wilhelm did it all in relief. Billy Hoeft and Dick Hall did start 25 games between them. Wes Stock did a good job with his 5-0 record and three saves. Hoeft was marvelous, recording a 2.02 ERA, seven wins and three saves. His 1.16 WHIP would standout in any time frame. Hoeft won 20 games as a starter for Detroit a handful of years earlier. 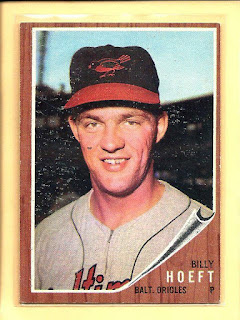 In fact, Pappas, Brown, Stock, Wilhelm, Hoeft and Hall were all at 1.18 or below when it came to WHIP. It was a strong staff and a good solid team, and while it lacked the name power of the Yankees and Tigers, the 1961 Baltimore Orioles were a solid club which deserved better.

It is interesting to note, Paul Richards led them to 89 wins and second place, finishing behind the Yankees in 1960. He was replaced by Lum Harris with 27 games to go on the teams way to finishing third despite improving by 6 wins in 1961. Richards left the team on September first to take over as GM of the new Houston Colt .45's. The 1962 season saw the Orioles, under Billy Hitchock fall to 77 wins and a 7th place finish of the 10 teams.

Please share this blog with your friends and colleagues and leave a comment at the bottom of the blog if you have one. Thank YOU VERY MUCH!! Please pick up a copy of my book "Tales of My Baseball Youth; A Child of the 60's" at www.bobbrillbooks.com, or on Amazon.
Posted by Baseball in the 1960s at 10:08 PM