The Best of the Fourth

TRIVIA QUESTION:  What was Gene Mauch's record in the post season?

ANSWER TO TRIVIA QUESTION IN THE PREVIOUS COLUMN: In 1969 the Atlanta Braves lost in the playoffs to the eventual World Series winners; The Amazin' New York Mets.

July 4th, 1964 could not have been more memorable for the Philadelphia Phillies. They were sailing along with a half game lead atop the National League standings and their best pitcher was on the mound. To say Jim Bunning was brilliant is an understatement. Bunning may have been at his best on holidays, as just a few days earlier he tossed a perfect game on Father's Day against the Mets. It was a marvelous day, and on this holiday it was hard to imagine for Phillie fans the things which were to come. 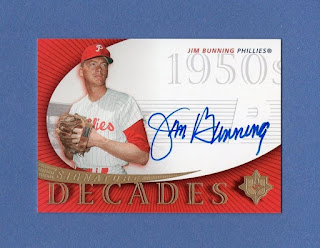 The game started evenly enough against the second place Giants. In the top of the first at San Francisco, rookie Richie Allen doubled to score Johnny Callison from first after the strong armed Phillie's outfielder managed a two out walk. The Phils were off and running against Jack Sanford, or so they thought.

In the bottom of the first, Giant third sacker, Jim Ray Hart singled to left. Batting second in the order was the aging former Dodger and Met, Duke Snider. Snider took Bunning deep to right field for his fourth homer of the year and no. 407 in his career. It would be his last home run in the big leagues. With Hart scoring ahead of him, the Giants now led 2-1. 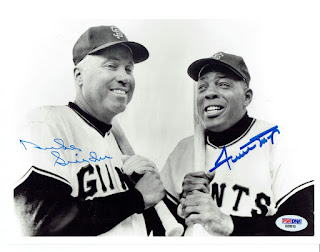 And that was all the scoring until the Phils pushed over a run in the sixth when, with Billy Pierce on in relief of Sanford, Allen drew a two out walk. Wes Covington singled to right. Snider came up with the ball and with Allen running on contact, the "Duke" attempted to throw him out. The throw was wild and Allen came around to score the tying run on Snider's error. Clay Dalrymple followed with a single which likely would have plated Allen, so the run was earned. Future Hall of Famer, Gaylord Perry came in to relieve Pierce.

Bunning was masterful but Perry matched him pitch-for-pitch. Not a man reached base until the 10th inning when Bunning himself singled up the middle with one out. Perry got Tony Gonzalez to bounce into a double play to end the threat.

In the bottom of the 10th the Giants threatened. With two out Jose Pagan singled but didn't get anywhere before Bunning retired the side. In the 11th the tide turned.

Leading off the 11th, little known John Herrnstein, having his best season and who started at first base before moving to left field later in the game, opened it up with a single to right. After Callison popped out, Allen again did the damage. Rookie of the Year for 1964, the slugging third baseman drilled a Perry pitch deep to right-center field for a triple scoring Herrnstein with the go-ahead run. Wes Covington put the game out of reach by blasting his 8th homer of the year deep to right field as the next batter up. The Phillies led 5-2 and the game was over. It left manager Gene Mauch with a big smile on his face. 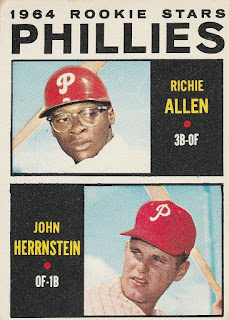 Jack Baldschun took over for Bunning in the bottom of the inning and the Giants went down in order. He struck out Hart and Snider and got Willie Mays to fly out to center. Bunning was incredible as he was all year. He was 9-2 with the win, giving up only six hits, walking one and striking out nine. Just over 30,000 people saw the Giants fall in Candlestick that day. The win moved Philadelphia to 1.5 games up over the Giants in the NL. The Cardinals were still 10 games back and were yet to make their move.

The Phils would beat the Giants the following day and the Reds the day after that. Then they fell into a short tailspin losing six of their next seven. However, it was nothing like what would happen just a few short months later.

On September 21st, leading the NL by 6.5 games with only 12 left in the season, they lost the first of three to Cincinnati followed by nine straight losses. On the 27th they fell to the Braves 14-8 and dropped out of first place for good. Losing the next three to the Cardinals in St. Louis assured one of the greatest collapses in MLB History. They won the final two games, but by then the Cards had clinched and the Phillie slide was in the books.

Snider hung them up at the end of the season, Allen would go on to a strong career finishing his 15 years with a .292 lifetime average, 351 homrs and twice led the AL in homers with the White Sox. Bunning, the future US Senator from Kentucky, went to the Hall of Fame with a 224-184 record, a lifetime 3.27 ERA and having pitched no-hitters in both leagues. Amazingly the great pitcher only won 20 games once (20 wins in 1957) but came close several times, winning 19 in four different seasons, including 19-8 in 1964 including the Perfecto. He never pitched in the post season.

Manager Mauch won 92 games that season and finished in second place. In 26 seasons he won 1902 games but lost 2037, having never won a World Series. He deserved better, but he will always be remembered for the Phillies collapse of 1964.