TRIVIA QUESTION:  The 1961 Yankees were considered baseballs second greatest team of all time, behind the 1927 Yanks. Where did the Tigers finish in 1961?

ANSWER TO TRIVIA QUESTION IN THE PREVIOUS COLUMN:  In 1966 the player who spent most of the time playing third base was bonus baby Bob Bailey. Bailey shared some of the time at third with utility super sub, Jose Pagan. Bailey played left field against left handed pitching that season. The following year he was traded to Los Angeles along with shortstop Gene Michael for Maury Wills who took over at third in Pittsburgh in 1967. It was the same Gene Michael who later became famous as the Yankees executive.

It became common knowledge after Jim Bouton published his tell all book "Ball Four," that Mickey Mantle had been known on occasion to tie one on. Well, it was more "on" than "on occasion." Mantle's drinking and carousing became the stuff legends were made of, whether or not it was good for baseball or the player.

The story we're about to detail is based on one of these incidents. We say one because to be honest   there were six times in Mantle's career this same thing happened - with or without the hangover. The story is about his hitting two homers in a game against Detroit. Since this story was relayed by a reader of this blog we'll look at the most logical game by looking into the archives. It was a story told to him by his friend and former player Frank House. For the story we must go back to September 3rd, 1961. Mantle was in his prime and it was also the last time he'd homer twice in a game against the Tigers. It was also the final season in the big leagues for House.

Our reader found our column in the Facebook Group Growing UP in the 60's. It is a fun group dedicated to cool stuff and a cool era.

The story as told to our reader was told to him by House, who was a journeyman catcher with the Detroit Tigers. After reading the story we searched the archives and found the game in which we believe House was talking about. The story is slightly different than told to our reader so while we can't be 100 percent sure it's the same game, you get the picture. 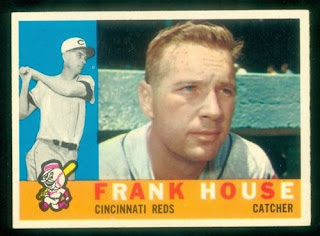 It was September 3rd, 1961 and the Yanks had pretty much wrapped up one of the greatest seasons in baseball history. It was the season Roger Maris hit 61 and Mantle was challenging him. An injury forced Mickey out of the final games of the season and he would finish with 54.

The Tigers were 86 and 50 and the game was taking place in New York. House, who did not start that game but came in later. The catcher at the time smelled alcohol on Mantle's breath when he came to the plate in the first. It was evident from the Tiger players, Mantle had probably not even been to bed from his escapades the night before. Maris had hit no. 53 the day before while Mantle had a single and an RBI. Mantle was stuck on 49 homers at the time.

Watching from the stands were 55,676 people as Mantle stepped in to face Jim Bunning in the bottom of the first with New York trailing 1-0. With two out and Maris on first via a single Mantle promptly hit a Bunning pitch to the deepest part of right field for a two run homer. Yogi Berra followed with a solo shot and New York led 3-1.

The Tigers bench marveled how Mantle with a hangover could take one of the best pitchers in the big leagues so deep in the first. Mantle was not done. Bunning struck out Mantle in the fourth, and again  in the sixth. Meanwhile the Tigers were slowly building off Yankee pitching and took a 5-4 lead into the bottom of the ninth. 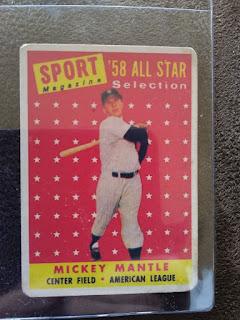 When Mickey led off the bottom of the ninth, the Yanks a run behind, he faced Gerry Staley. Mantle, still likely with a splitting headache, took Staley deep to right-center to tie it up. Before the inning ended New York got a three run blast from Elston Howard to walk off an 8-5 win. Ronnie Kline gave up the blast in relief of Staley.

Frank House was behind the plate in that fatal inning. He told our reader he asked Mantle after the second homer, where he went for dinner the night before, because he and some of the other players wanted to go there too. The story we are telling differs only slightly from the one retold by House to the reader, but it seems this was the most logical game, despite some minor differences in the telling.

How true the story is we'll never know. House died in 2005 at age 75, Mantle is long gone and memories have faded over the years. The interesting part of the story is you couldn't blame the old catcher if some of the dates and facts were missing or faded. Six times Mantle hit at least two homers in a game against Detroit and House was there for almost all of them.

Here is a note from the reader regarding his friendship with Frank "Pig" House.

I had a close friend by the name of Frank "Pig" House. Today a good bit of Bessemer is named after him. He was the bonding and insurance agent for the company I worked for as a estimator for 18 years. As the estimator I was blessed to get to meet often with Frank in office visits and over lunches or dinners on a one on one basis. The stories he told over years were outstanding. Personal stories that are not recorded anywhere. The man had a picture on his desk of him tagging out Nellie Fox at home plate in Tiger Stadium.