Hoops; There They Were

TRIVIA QUESTION:   What 1950's Dodger player also played pro basketball before going onto a more prominent career out of sports?

ANSWER TO TRIVIA QUESTION IN THE PREVIOUS COLUMN:  In 1935, for the third time in his career, Babe Ruth changed teams. When the Yankees released the Bambino, he was signed the very same day by the Boston Braves of the National League. He went on to have his worst season ever and was released not long after. For only the third time in his illustrious career did he hit under .300, and the only time under .200 finishing .181. He had 13 hits in 72 at bats. And just like the Babe he was, six of those 13 hits sailed over a fence for a home run. The last three came on May 25, at Forbes Field against the Pirates. Even at age 40 the Babe could still muster a three homer game.

A reader of this column wrote in and asked if we could do a column on two Chicago White Sox players who also played in the 1960's NBA. So here goes.

To say Dave DeBusschere was a better basketball player than a baseball player is saying a lot but in reality the New York Knicks forward might have had a really great career in both if he'd had stuck with it. DeBusschere's pitching career with the Sox only lasted two seasons but one of them would have gotten him a multi-year, multi-million dollar contract today.

In 1962 the 21-year old righty pitched well out of the bullpen for Chicago. Recording 18 innings in relief his ERA settled in at 2.00 over 12 games in which he finished nine of them. He only allowed five hits but that might be attributed to the fact hitters could not settle in against the 6'6" future NBA star. He walked 23 batters in 18 innings and proved wild enough to keep hitters off balance.

The following year the Sox decided he should be a starter and he proved himself there as well. Appearing in 24 games he started 10 of them and completed just one. He picked up a save in relieve and tossed a shutout on his way to a record of 3-4. The highlight had to be the shutout. 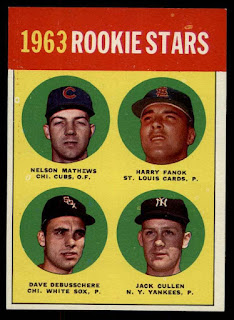 On the evening of August 13th with the Sox sailing 17 games over .500, DeBusschere got the call against the lowly Indians and Jim Mudcat Grant. Big Dave was never really in trouble on his way to a six-hitter except in the fourth. He gave up three singles in the inning but the lack of speed in the form of Johnny Romano, Tito Francona and Al Luplow probably kept the Tribe from scoring. The Indians only managed one walk while DeBusschere struck out three. 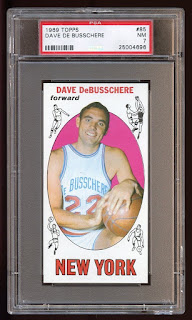 The Sox would go onto win 94 games and finish in second place in the American League but DeBusschere was done. Perhaps it was the long dual season. After being drafted by the Detroit Pistons in 1962 as the fourth overall pick, he couldn't pass up playing in the NBA (80 games) and when that season ended joining the baseball White Sox. In 1963 he chose to only play 15 games for Detroit and a full seasons for the Sox. Either way after the 1963 season the right handed pitcher hung up his cleats and donned his sneakers for good.

While he actually had a Topps baseball card in 1965, he had been gone for a couple of seasons.  His NBA career put him in the Hall of Fame. He averaged 16 points a game and made the All-Star team eight times. Interestingly enough, he was under the basket and fell to the floor when Jerry West fired off his 55 foot shot as time ran out to tie a playoff game with Knicks. 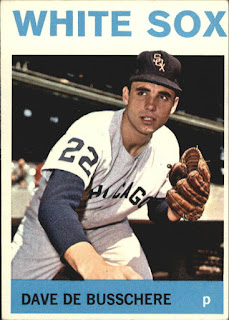 The other White Sox NBA player was Cotton Nash. Nash had a less than exciting 1967 season with the Sox before moving onto the Twins for his final two years. The first baseman failed to get a hit in three at bats for Chicago before being traded to Pittsburgh for Ed Hobaugh. The trade was voided and the Twins got involved a couple months later.

Earlier in the decade Nash spent the 1964-65 season playing basketball, first with the Lakers and then the Warriors. He only averaged 3.0 points per game before moving onto a very short career in the ABA with the Kentucky Colonels where he averaged 8.5 in one season. He played in the ABA after his baseball career ended, trying a comeback at age 25. 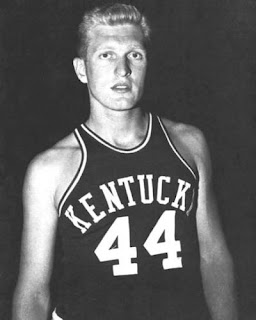 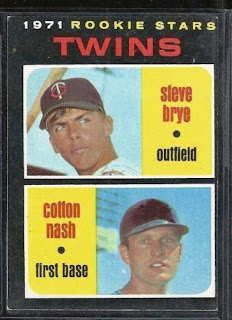 His baseball claim to fame might be on September 10, 1967, in the ninth inning of Joel Horlen's no-hitter he came in defensively for Ken Boyer at first base and recorded all three outs. The White Sox may be the only team in history to have two NBA players grace the confines of White Sox Park.